another excerpt from “Six Weeks,” current work-in-progress. To read previous excerpts from this work:

In the next few months, a longer piece will appear in the online literary journal Verity La.

It takes me more than ten minutes to open the door. I insert the key and try to turn it, but it doesn’t budge. I take it out, flip it, and insert it again into the key hole. Nothing. I push against the door with my elbow and try again. Then I try to pull the key out just a millimetre, and try to turn it, first clockwise, then counter clockwise. I push the key in hard, and try again. The lock mechanism is some 25 years old, and we’ve been struggling with it for a few good months. Usually, it just needs some wiggling around for a few good seconds. I take the key out and lean on the door. Breathe in, breathe out. Focus. All of a sudden, the door opens, I loose and find my balance before falling on my mother. She’s standing there, her slight body upright, though I can see she’s making a great effort to keep it so. “Salam, mama,” I kiss her on her left cheek, so she can feel the warmth. “This door?” I walk toward the salon behind her, to make sure she doesn’t lose her balance. “Is baba planning on replacing the lock at some point?” She turns around, and I see the mischief in her smile. She changes direction, and now we’re walking to the kitchen. She drags her right leg, and I see that it’s because she doesn’t lift it up enough, not bending her knee. I trail behind her.

She stops in front of the fridge, her eyes searching, scanning the magnets. She’s lost the ability to read, but she can still sometimes make the connections between whole words and associate them with images. Her eyes stop on a magnet with an image of a key and a lock. “You want me to call him?” I take the magnet. The name of the locksmith is Jewish. She nods, delighted that for once, she is understood quickly and easily, without too much fuss.

She walks back into the salon, and I watch as she is now lifting her right knee higher, as if in victory, and her leg isn’t dragging that much. She sits in her chair, a conspiring expression on her face, and glares at me, waiting. I realize she wants me to call the locksmith now. “Oh, I’ll ask baba to take care of it when he gets home.” Naively thinking this was the end of it.

And so this is how we ended up having the whole lock mechanism changed. And this is how I got screamed at by my mother at the beginning of the day, and then by my father at the end of the day. He was furious. This is his house and how dare I change the lock without his knowledge and if I wanted to change locks I could do that in my own house, and this is his house and how dare I interfere, and he was planning to change the lock anyway. And now how is he going to show his face to Abu Saleh, whom he promised he wouldn’t let anyone touch the lock other than him! And who is this Shlomi anyway? How do I know he didn’t make a copy of the new key and might come and rob the house! What finally put a stop to his irrational rage was a siren, followed by the sound of rockets falling in the sea.

If you enjoy my writing, please consider supporting my work: www.patreon.com/khulud_khamis 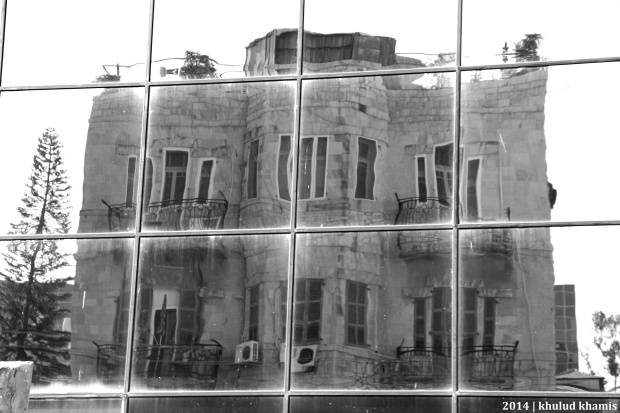