Writing in the Margins – Fluid Identities

In her Feminist Theory – from Margin to Center, bell hooks opens with the following preface:

“To be in the margin is to be part of the whole but outside the main body. As black Americans living in a small Kentucky town, the railroad tracks were a daily reminder of our marginality. Across those tracks were paved streets, stores we could not enter, restaurants we could not eat in, and people we could not look directly in the face. Across those tracks was a world we could work in as maids, as janitors, as prostitutes, as long as it was in a service capacity. We could enter that world but we could not live there. We had always to return to the margin, to cross the tracks, to shacks and abandoned houses on the edge of town.

There were laws to ensure our return. To not return was to risk being punished. Living as we did – on the edge – we developed a particular way of seeing reality. We looked both from the outside in and from the inside out. We focused our attention on the center as well as on the margin. We understood both. This mode of seeing reminded us of the existence of a whole universe, a main body made up of both margin and center. Our survival depended on an ongoing public awareness of the separation between margin and center and an ongoing private acknowledgement that we were a necessary, vital part of that whole.

This sense of wholeness, impressed upon our consciousness by the structure of our daily lives, provided us an oppositional world view – a mode of seeing unknown to most of our oppressors, that sustained us, aided us in our struggle to transcend poverty and despair, strengthened our sense of self and our solidarity.” 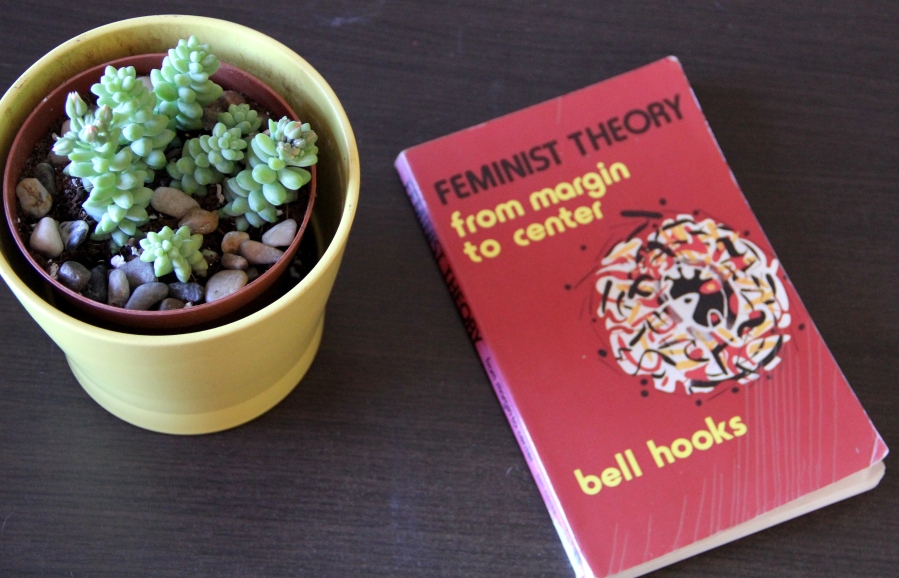 I have read this preface numerous times, and the text keeps drawing me back to it with some magical thread. In less than 300 words, bell hooks has succeeded, in a brilliant manner, to capture such a broad and complex tapestry of her world, a whole concept that has been the basis for shaping her ideas and worldview in a succinct and precise way.

This is for me the best of feminist writing, because it comes from the most intimate and personal experiences and at the same time captures something collective and wider, pointing at broader socio-political structures and oppressive mechanisms.

In the above passage, the railroad tracks are real boundaries, dividing – in a sharp and clear way – the world into two. But instead of succumbing to this division, bell learns to manoeuvre and negotiate the spaces of these two worlds, growing and developing from the new perspectives and points of view, and from the constant movement between these two worlds. Learning to see things from within as well as from without.

This text is very personal to me, as I have struggled for so many years with a concept that is similar in some aspects, yet so very different in others. I have always had that sense of not quite being positioned where I thought I was supposed to be. Being half Palestinian, half ajnabiyya (foreigner in Arabic), I always moved between the spaces of belonging and not belonging, trying to find that stable place where I would feel comfortable; a place where I would feel at home. I struggled for years to find that place, in vain. I finally discovered that such a constant place does not exist, at least not for me personally.

It was then that I slowly began realizing the power and strength embodied in a fluid identity: in the very ability of moving from within to without, to be able to see things from within, and then step away and see the same things from without. It is not a space in the margins, nor an in-between space; it is not a place of belonging, nor of not belonging. The strength of it lies in its movement: sometimes being positioned at the very center, at other times on the margins, still at other times completely outside. This movement, what I call fluid identity, is what enables one a broader perspective; to see and analyze broad socio-political structures from varied angles and perspectives, and to make intricate connections between phenomena that otherwise would seem unrelated. I have learned to appreciate this fluidity, and am still learning how to negotiate these spaces.

Alev Adil, a poet and writer, born to a Turkish Cypriot father and an English mother, deals with issues of identity, the sense of displacement, in her poetry. Reading some of her poems in her collection “Venus Infers,” felt almost like home to me. Reading one of her poems, I felt something deeply familiar. Not only in the layers of meaning, but in the very choice of words and the very way in which she places the words to form meaning and convey this sense to the reader. This poem captured my own sense of displacement and that which is left behind, lost.

“I am not whole
but parts of me have been
torn up and left behind.
No, not my heart
much more – my tongue.”

I could barely contain myself after reading these lines. I had written a poem, “Lost in Translation,” published in Sinister Wisdom (Issue 94), which not only captures the same concept, but is similar in its structure and the choice of images.

“parts of my identity
have
been –
for some (un)identifiable

Floating between-
the languages
in a-
void
between the-
continents.”

There is loss and mourning that loss in both poems. Yet at the same time, in that in-between space – between cultures, between languages, between identities, in that very movement and fluidity, we find the strength and new perspectives.

My hope is to continue exploring these issues in more depth, exploring the various layers of what it means to “Write in the Margins,” from different perspectives. I hope these articles will ultimately combine into a collection of one whole, a book called “Writing in the Margins.”

If you enjoy my writing, please consider supporting my work at: https://www.patreon.com/khulud_khamis?ty=h

2 thoughts on “Writing in the Margins – Fluid Identities”

There was an error retrieving images from Instagram. An attempt will be remade in a few minutes.